Although British cuisine is not recognized as a worldwide celebrity like French or Italy cuisine, but it obviously belongs to one of the most refined and special ones. Of course everyone has ever heard of English breakfast and afternoon tea which are an essential part of the Englishmen everyday life.

English breakfast can hardly be recognized as dietary, it mostly contains eggs, beans, bacon. The punctual Englishmen usually have breakfast between 7 and 9 am and lunch is typically about 1:30 am. Dinner is the last meal of the day and it takes part between 6:30 and 8:00. Dinner may also be called “tea” in the northern area of the country and being the main meal of the day, it is considered a whole art of its own. It is actually not what all visitors usually imagine: at half past three everyone sedately sips English tea. The menu of the afternoon tea is quite exquisite and various. It may contain smoked salmon with cream cheese, ham and mustard, coronation chicken, cucumbers, apple biscuit scones served with cream tea in a fine porcelain pot. 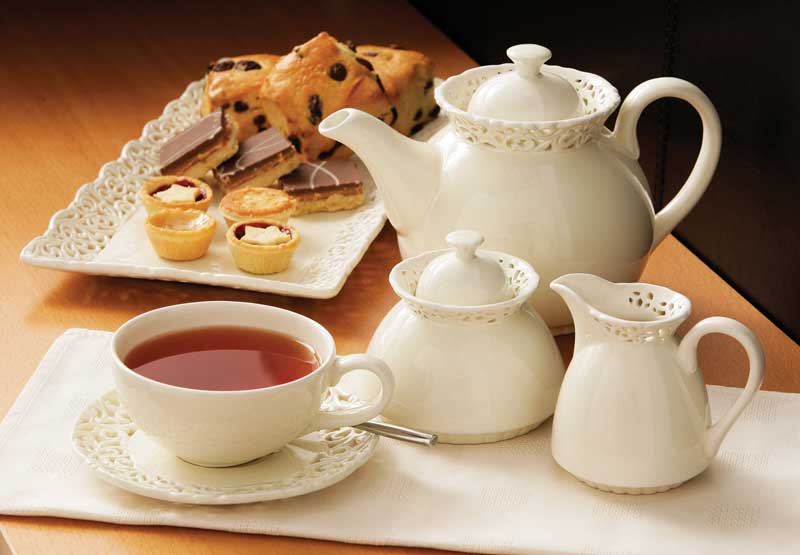 The afternoon tea is not common for the working class population, since everybody goes to work at this time. This meal is replaced by supper eaten rather at the end of the day than in the afternoon.

Surely no one can imagine British cuisine without roasted beef, noble and famous dish in the English identity. The history of the beef-eating dates back to the times of Queen Elizabeth when it was condemned by the church propagating vegetarian diet, and then glorified in the song “The Roast Beef of Old England”. Anyway it remains a celebrity on the table of all noble and middle class Englishmen. There are thousands of recipes and hundreds of restaurants cooking them for the most hypercritical visitors.

As a result of trading partnership between Britain and India established in the middle of 17th century the curry dishes have conquered the British cuisine forever. British colonial rulers had to control their affairs in India, that is how Indian curry took root in the British cuisine. The main dish is the chicken Tikka Masala, a very creamy marinated chicken cooked in a variety of recipes: each restaurant you visit will serve you with its own unique curry Tikka Masala dish. Every week the British eat about eighteen tons of Tikka Masala dish every week. It may not only be independent dish, but also a filling for pizza, sandwiches or pies. Today the number of Indian restaurants grows in Great Britain with influx of the Indians and the popularity of curry keeps spreading all over this area.

One more part of the British cuisine is pubs. About 75% of the Englishmen of all ages, occupations and classes visit pubs. The special feature of a pub is a non-waiter system, that is no one will come to serve you if you will sit at a table outside. A traditional pub should have at least two bars: public bar and lounge bar. The public bar is mostly for the male visitors, typically laborers speaking loud and drinking much. The lounge bars are rather for sitting down, talking slowly and having rest after a hard day with a friend. There is also a price difference between them, the lounge bars are a little more expensive.

The modern pubs are now competing with restaurants: it is a place to spend time with a partner, friend, eating, drinking and talking about business. Tea and coffee are also on menu, so children and women are surely welcome. In the pub you will surely have possibility to taste the famous steak, kidney pie, sandwiches, pickled eggs, crisps or Welsh rabbit.

Anyway it is worth going to the UK to  experience the variety and splendor of the British cuisine.